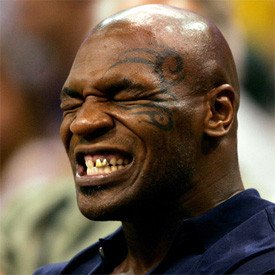 MIKE TYSON
The good news: Iron Mike is digging himself out of his financial hole nowadays with roles in The Hangover movies, a reality TV show, and a feature-length documentary. The bad news: Tyson declared bankruptcy in 2003 after pissing away more than $300 million. He reportedly spent more than $4.3 million on cars alone, $2 million on a bathtub, and $140,000 for two Bengal tigers. In fact, the youngest man to ever win the WBC, WBA, and IBF heavyweight titles was at one point worth less than $1,000.