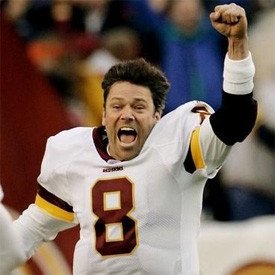 MARK BRUNELL
After spending 19 seasons in the NFL and amassing more than $50 million, current New York Jets backup quarterback Mark Brunell faces a string of lawsuits that could end up costing him about $25 million. The former Pro Bowler and Super Bowl champ reportedly dumped his fortune into failed real estate deals and … Whataburger restaurants? Ouch. In June 2010, Brunell filed for Chapter 11. No word on whether he’s decided to become a vegetarian.