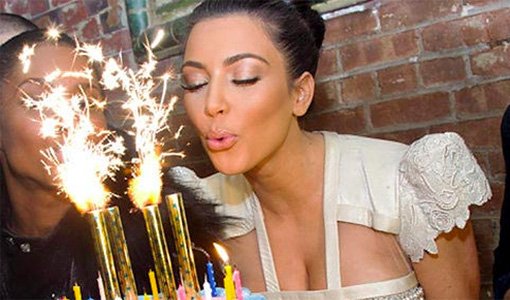 Of course, amazing things are amazing because they’re tough to think of and pull off. But instead of giving up and reserving your usual table at Chili’s, keep reading. Because I asked women to tell me about the amazing birthdays their boyfriends and husbands planned and compiled the best suggestions. If you, um, borrow one of the ideas, I guarantee she’ll be saying, “That was an amazing birthday!” No translation needed.

WET PAINT
“I got an invite from some friends for a day trip to the beach a week before I turned 26. It was girls only, so I told my boyfriend we’d catch up that night to celebrate. The day of my birthday, when I got back from the beach, my kitchen — which I’d always hated since it was painted a depressing dark gray — had been repainted a gorgeous yellow color. My boyfriend had arranged for my friends to get me out of the house for the day so he could do it. Now every time I walk into the kitchen, I’m reminded of how thoughtful he is.” —Kaitlin

MAINE SQUEEZE
“I moved to middle-of-nowhere Pennsylvania from Maine, so I always complain about how I can’t get a decent lobster anymore. Last year, for my 29th birthday, my boyfriend had a dozen lobsters shipped from Maine and invited 10 of my friends over for a lobster boil in his apartment.” —Anne

DINNER FOR 17
“Two years ago my boyfriend took me out to dinner to celebrate my 25th birthday. When the cake came out, so did about 15 of my friends as a surprise.” —Elizabeth

99 PROBLEMS BUT NOT KNOWING WHAT TO DO ON HER BIRTHDAY AIN’T ONE
“My boyfriend got me tickets to Jay-Z for my 25th birthday. But it wasn’t the gift — it was the way he presented it. Before we went for drinks, he called the bartender and asked him to play only Jay-Z songs while we were there. After about the fourth song, I commented on how much Jay-Z they were playing, and that’s when he pulled out two tickets and asked, ‘How would you like to hear even more?’” —Gina

RUBBING IT IN
“When I turned 26, he picked me up from work on my lunch break and drove me to a spa where he’d scheduled a 50-minute massage. Afterward, he gave me a packed lunch with my favorite foods. What a sweetie.” —Sam

STEAL THIS STOLEN IDEA!
“On my 33rd birthday my ex woke me up by blasting the song ‘Birthday Sex’ by Jeremih and bringing me champagne in bed before initiating, well, birthday sex. It was cheesy, but it was also cute, hilarious, and sexy. Later, I found out one of the characters on How to Make It in America had done the same thing, but I can’t blame him for recognizing a funny and fun idea.” —Carla

USE THE FORCE
“I had to fly to Chicago for work the week of my birthday and was pissed that I’d be away from my husband. Side note: He didn’t seem that upset, which pissed me off even more. I left for the airport from work, and when I arrived at O’Hare, my husband was standing with all the car service guys, holding a sign with my name on it. Actually, the sign said ‘Luke and Leia,’ the nicknames he gave my breasts. Points for being hilarious. He’d flown out that morning so we could be together on my birthday.” —Lenore

How to Know if She is Talking to Someone Else