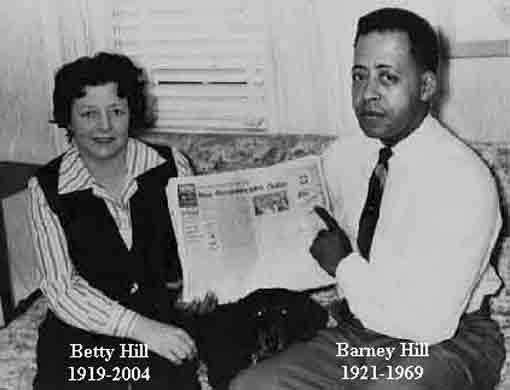 #1: The Hill Abduction | New Hampshire, 1961
When the Hills spotted a mysterious aircraft hovering above them during a nighttime drive, Barney took a closer look with a pair of binoculars. He later claimed that he saw about 10 humanoid figures through the craft’s windows.

And that’s pretty much the last thing he remembered until the couple found themselves 35 miles down the road and unable to account for the previous two hours of their lives. Betty’s dress was torn and had traces of a pink powder, and the following day the couple noticed disc-shaped burns in their car. Their watches were both two hours behind.

The Hills underwent hypnosis in an attempt to recover their memories after their first UFO sighting, and the doctor who hypnotized them concluded the experience was a case of “psychological aberration.” In other words words, he was pretty sure they imagined the whole thing. The Hills disagreed.