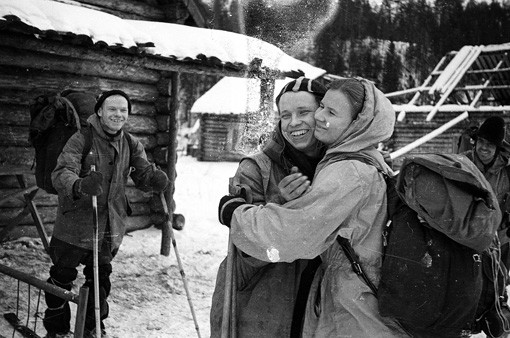 #4: The Dyatlov Pass | Russia, 1959
On February 2, 1959, nine Russians hiking up a treacherous mountain named Kholat Syakhl (it translates to Mountain of the Dead) were mysteriously killed. On February 26, their abandoned, ravaged, and partially snow-covered tent was found with all their shoes and other belongings still in it. Adding to the mystery was where and how the bodies were discovered; they were scattered amongst the campground, some clothed, others in only their underwear.

Two of the skiers had broken ribs and skulls, another was missing her tongue. (Some retellings say radioactive materials were found near the bodies, the bodies had orange skin, and that all of their hair had grayed, but none of those things have ever been confirmed.) Investigators found no signs of a struggle on any of the bodies.

So what happened? Experts believed 1. that there was an avalanche, 2. that paradoxical undressing — when hypothermia sufferers remove their clothing because they think they’re burning up when they’re actually freezing to death — explains why some of the bodies were undressed, and 3. that the tongue was removed by a hungry animal. Others were certain it was the work of extraterrestrials. Wonder what their evidence was? Then you’re clearly a Communist sympathizer.