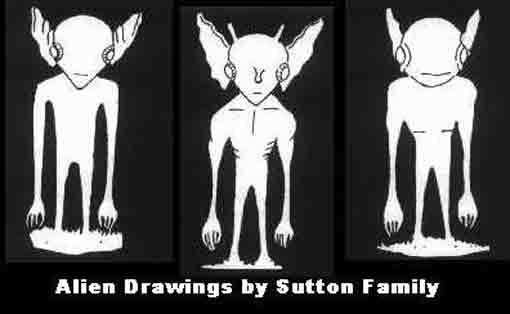 #5: The Kelly-Hopkinsville Encounter | Kentucky, 1955
The same year Marty McFly was shredding at the Enchantment Under the Sea Dance, equally weird stuff was happening at the Sutton farmhouse in Kelly, Kentucky. First, houseguest Billy Ray Taylor told the Sutton family he saw a UFO land in a nearby gully. Later, the family dogs began barking loudly, and so “Lucky” Sutton and Billy Ray grabbed guns and went outside where they allegedly encountered a three- to four-foot “goblin” with long arms, claw-like hands, pointy ears, short legs, and bug eyes.

Showing the alien some ol’-fashioned Southern hospitality, the two men shot at it — but the bullets did nothing. The creature retreated into the woods and the men went back inside to change their underpants. Throughout the night, more goblins emerged and terrorized the group of 11 (8 adults, 3 children) inside the house by peering through the windows and banging on the roof. Sutton and Taylor continued to fire at the creatures; the farmstead was shot to hell, but no one was harmed.

When the police came to the house, they too heard noises and saw strange lights, but did not see (or arrest) any alien beings. Even years later, the people involved all stuck to their stories, and none really profited from the experience. Still, ::cough:: moonshine ::cough::