Brooklyn’s Gowanus Canal is a disgusting 1.8-mile cesspool of liquid grossness. According to CBS2 New York, confirmed contaminants include cement, mercury, PCBs, oil, lead, volatile organic compounds, and coal tar. To most of us those are the surefire signs to do whatever’s necessary to never have that water come anywhere near our skin or Brita filters. Even the EPA was all like, “Eww, no, don’t swim there. Yucky!”

Also: 5 Weird Things That Cause Constipation

“The Gowanus Canal is arguably the dirtiest waterway in the country. It’s home to pathogens, bacteria, viruses, blood-borne pathogens, dog poop, gas, oil from the streets, ‘evidence’ thrown off bridges and the notorious black mayonnaise that lines the bottom.”

No, he didn’t get gonorrhea from the swim, but rumor has it he’s tinkering with the idea of lots of unprotected sex with known loose women to make it happen. Okay, the last part is a lie. Point is, Swain and his diving suit are bat-shit crazy, but he’s doing it to for a good cause, which is … to prove that the water is filthy and needs cleaned up. (The dolphin that died in 2013 after swimming in the canal wasn’t proof enough, evidently.)

“I’m willing to go in there to make that point — to say it’s OK to want things to be different; it’s OK to put yourself on the line.”

It’s Swain’s second time soaking in the STD water. Last April he attempted to swim the canal but had to stop because of storms. But a quitter swain is not. This time, he made it! However, he’s still free of gonorrhea. But we have faith in Swain that someday soon he’ll shed that Hazmat suit, do a cannonball into the water, and finally give himself the clap. 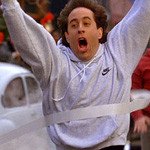 Want To Keep Reading Words? Great! Next Story …30 Minutes Of Exercise Per Day Isn’t Cutting It [Study]
For years we were told 30 minutes of exercise per day was enough to stave off heart disease. And for years, it appears, we were lied to.