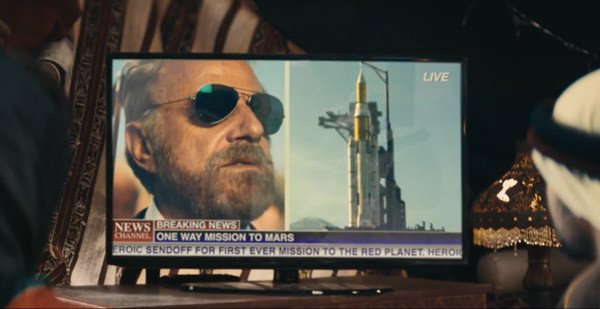 The “Most Interesting Man In the World” — the silver-haired, handsome, bearded dude who loves to down Dos Equis beer — is heading to Mars on a one-way mission. Why? Because it’s beautiful this time of year. But that’s good news for you because you can now own a handful of his possessions, including the tux he wore to his last masquerade, his Spanish guitar and matching mariachi suit, his astronaut suit from his 2010 stratosphere jump, and a few lock of his scruff. *

Through Cinco de Mayo the Dos Equis crew will hit the road to pawn off The Most Interesting Man’s  estate. Along with the chance to own his stuff, you can enter to win an all expenses paid week-long trip for two to a Mexico.  Even better new — this isn’t just a money grab for Dos Equis. The proceeds from the auctions go toward two charities via The Impact Plan. One focuses on the Sheldrick Wildlife Trust to rehabilitate endangered animals in East Africa; the other serves to help reconstruct Himalayan villages in Nepal after the cataclysmic earthquake in 2015.

Also Read: We Went To A Dos Equis Luna Rising Party (And You Didn’t)

Anyway, the point is Dos Equis made a smart move with The Most Interesting Man character, but after a nine-year run, all good things come to an end. Except in this finale people and animals who are in need benefit. Pretty cool, right?

Get involved by going to info on DosEquis.com/CovetedCollection and Dos Equis’ Facebook page.

*No scruff will be auctioned off, unfortunately.