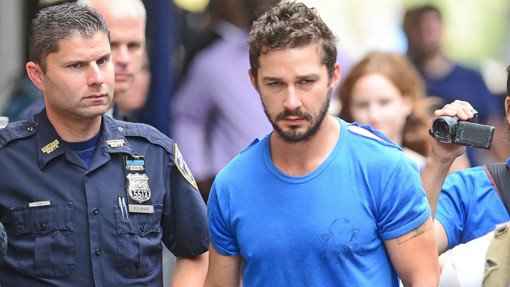 #2. Shia LaBeouf
What: Smoking And Being A Jerk In A Broadway Theater
When: 2014

In 2005 Indiana Jones‘ kid was arrested in L.A. and charged with assault with a deadly weapon. In ’07 he was again arrested in Chicago at a Walgreens pharmacy for misdemeanor criminal trespassing after refusing to leave the store; charges were later dropped. Then there was a car wreck in ’08 and fight with some dude in ’11, and finally we get to the best of the litter — his arrest for “acting disorderly and yelling and being loud” in 2013  he lit a cigarette and refused to put it out while attending a show on Broadway. Reports that LaBouf dropped homophobic slurs at arresting officers was also noted in the report. In the end, he was guilty of being a gigantic asshole (allegedly).

Next: Winona Ryder Has Sticky Fingers