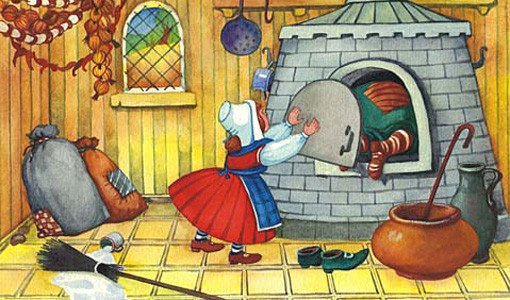 HANSEL & GRETEL
Who dies: The witch
Yes, she’s a child-killing cannibal, but there’s another equally compelling reason why the witch deserves to die: She’s a f*cking idiot. In this 19th Century rib-rickler, Gretel, a little girl who is herself so dumb she couldn’t figure out that leaving a trail of crumbs in the woods isn’t a great way to keep from getting lost, tricks the witch into bending over in front of an oven. The old hag had planned to bake Gretel and her brother Hansel in the oven, but instead Hansel and Gretel “nudge” her in, set it to broil, and leave “the ungodly witch to be burned to ashes.” On the way out, they steal a vase full of the witch’s gold and precious stones, which teaches children an important lesson: Kill old people and steal from them. 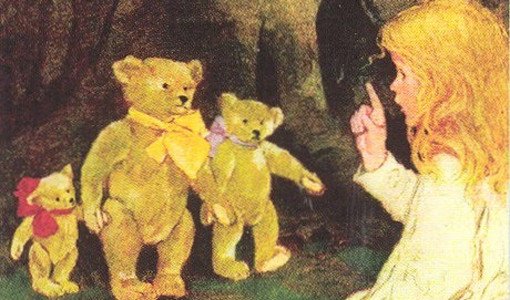 GOLDILOCKS AND THE THREE BEARS
Who dies: Goldilocks
After sitting in their chairs, sleeping in their beds, eating their porridge, and running up the long-distance phone bill while the Three Bears were at Home Depot — okay, so maybe we need to read the story again — Goldilocks tries to escape out of an open window when the bears return home. In 1831, British storyteller Eleanor Mure published a version of the story in which, upon her exit, Goldilocks is impaled on the steeple of St. Paul’s Cathedral. (Wait, what?) Oh, and no joke, that book was a gift for her young nephew’s birthday. Best Aunt ever!