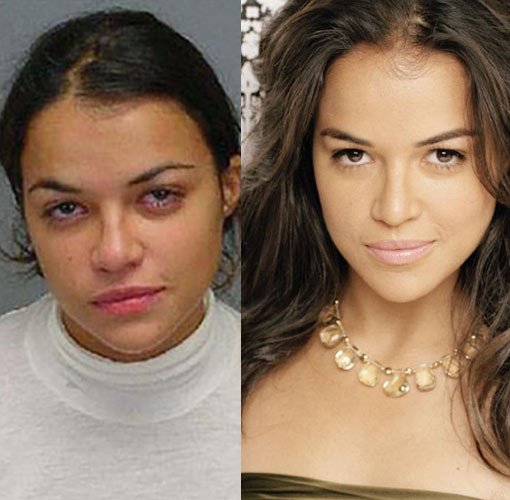 MICHELLE RODRIGUEZ
Yeah, she’s a star of Fast & Furious, and a Lost alum. Turns out, she’s also a terrible driver. Rodriguez and her perennial sour-puss face was arrested in 2003 in connection with a hit-and-run followed by a DUI arrest a few months later. While filming Lost — or should we stay, trying to ruin it with her awful acting — she got hit with another DUI. She pleaded guilty and payed a whopping $500 and spent five whole nights in jail. The Lost DUI violated her previous court deal and she was in big trouble!

Just kidding. She’s a celebrity, so instead of a month behind bars and 30 days of community service she spent 24 hours in lockup. “Let’s not let there be a next time,” we envision a judge telling her. “Oh, there won’t be,” she says with a sad puppy dog eyes. And then she got caught again violating probation. This time they threw the book at her. Well, a pamphlet. She served 17 days of a 180-day sentence. however, she was forced to wear an ankle monitor, which, like, totally clashed with like half of her outfits.

NEXT: SOME BAD ADVICE