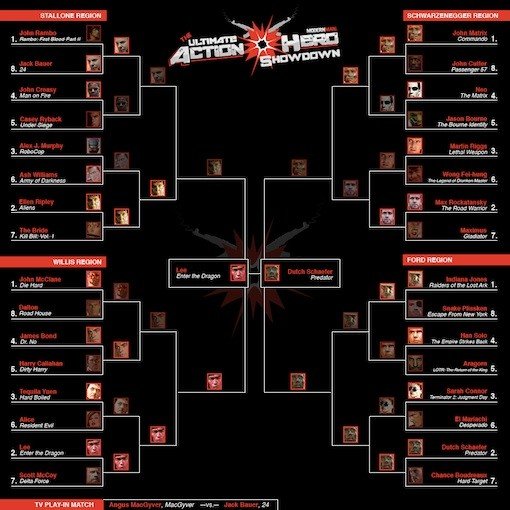 DAY 8: THE FINAL 4 AND CHAMPIONSHIP
(Click on the bracket for a closer look.) 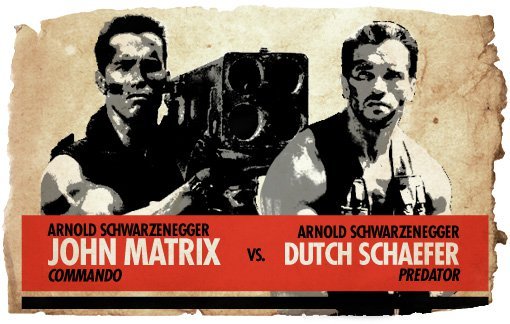 Eying each other warily, the crew-cutted human mountains lock arms in the most manly handshake the world has ever seen: Part greeting, part high-five, part slightly homoerotic arm-wrestling match. The two battle-hardened soldiers’ guns are quivering masses of veins and leathery skin … and the camera stays on it for far longer than anyone is comfortable with. Finally, Matrix loses concentration for just a moment as a vision of arch-nemesis Bennett’s metal mesh tank top flickers through his head, and Dutch handshakes him into submission. “Whatssamattah?” asks the triumphant special-ops badass. “Alyssa Milano got you pushing too many pan-cils?” Hey, they can’t all be winners. 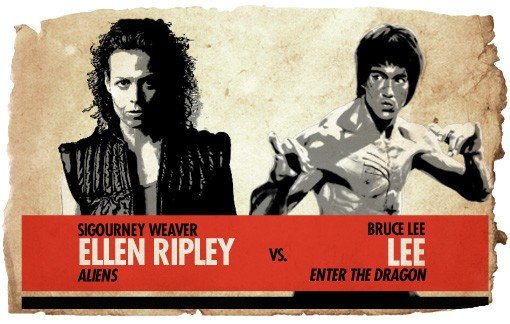 Knowing she stands little chance in a toe-to-toe fight, Ripley enters prepared: With two massive flame throwers duct-taped to the arms of a gigantic power lifter. Oh, and she’s also killed herself in order to be cloned with alien acid for blood. Also, she’s wearing her skimpiest white panties. But it’s all for naught. Lee casually steps up to the armored Ripley and, with blinding speed, scatters her sci-fi accouterments all over the ring with a single jab. “There is saying,” he says, with a zen-like calm. “Too many sequels make once proud turtle a fish with no eyes … No, I’m not sure what it means either … Anyway, in all seriousness, what were you thinking with Alien Resurrection?”
WINNER: LEE 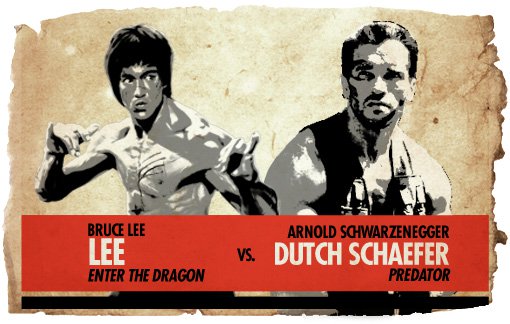 It’s the match literally dozens of people have been waiting for. In one corner, the diminutive kung-fu legend with fists and feet of fury. In the other, the hulking, alien-fighting super-soldier who destroys despotic South American regimes as a mere subplot. Too nimble for Dutch’s traps, Lee goes on the offensive, staggering the big lug with a few swift kicks. Realizing that he’ll be beaten if he doesn’t come up with a nifty trick, Dutch covers himself in mud yet again in order to escape detection. (Lee’s lack of thermal vision makes this a completely pointless task, but Dutch likes to get dirty.) Once Dutch gets to da choppah and simply nukes Lee … along with 30 square miles of rainforest. Why? Because some damn fool accused him of being the best — and it turns out, he is.
THE ULTIMATE ACTION-HERO: DUTCH SCHAEFER