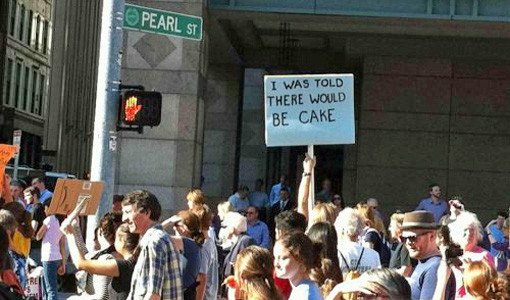 Thanks to the First Amendment of the United States Constitution, we can assemble, protest, and petition our government without having riot police crack our skulls with batons. But doing all of that in person takes too much time and effort (why do you think Occupy Wall Street fizzled so quickly?). Congregating on the Internet is much easier and cheaper to control, so the Obama administration created We the People, an online petition website dedicated to allowing people to vent their frustrations about the federal government’s policy decisions. If a single petition gains more than 25,000 signatures it earns a response from the White House.

Since America is perfect and we’re not communist freedom haters, we’ve never started a We the People petition. But we’ve checked them all out. Some call for Congress to compromise on the fiscal cliff, or to add funds to NASA’s budget, and to rethink “Stand Your Ground” laws. Others request totally plausible things like granting states permission to succeed from the Union. The thing is, the succession petitions — all 50 of them — don’t seem as moronic when you compare them to some of the other gems we found …

1. “Secure resources and funding, and begin construction of a Death Star by 2016.”
Signatures: 14,136
We have a bad feeling about this. Why? Because it’d be a huge waste of taxpayer dollars — Death Stars cost a fortune, yet are ridiculously easy to destroy.