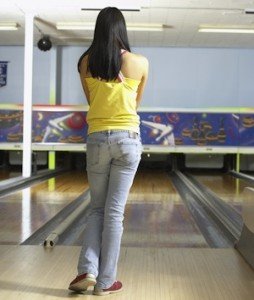 MISTAKE #4: DOING DINNER AND A MOVIE
“Hey, wanna do an activity where we’re in the dark and aren’t allowed to converse in normal voices for two hours? And I don’t mean sex?” No. No, I don’t. If I wanted to sit and stare at Leo DiCaprio for two hours, I would stay home and watch Titanic. (Which is usually what I do when I’m not out on dates.) So sitting in a crowded theater watching a movie isn’t my idea of a good time.

I take that back — it’s a good time when I’m with somebody I already know. Now, to be fair, I think many guys actually be catching on to this. So instead of the movie, you may make a reservation at a Thai restaurant and shove Tom Yum down your throat as you ask the girl about her hobbies. Well, that’s kind of overdone too. Girls watch a lot of romantic comedies, and it’s very rare for a plot to revolve around a series of dinners at ethnic restaurants. Think outside the sushi box!

Also: Level Up Your Foreplay Game

Solution: Bowling and karaoke. Yeah, they’re pretty standard activities, but you really don’t need to be a whole lot more creative than that. Believe it or not, women want to know what you like to do. It makes us feel like we’re getting to know you on some level that eating a meal does not allow. If you could do whatever you wanted on a Saturday afternoon, what would that be? Let’s do it! But also, ask her what she likes to do. Point is, being creative doesn’t necessarily entail weird The Bachelor-style dates like making pottery while rock climbing. We like simple, casual stuff too.