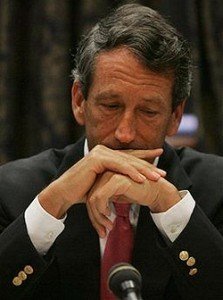 Mark Sanford
From June 18th to June 24th of 2009, Governor Mark Sanford of South Carolina was nowhere to be found. His wife claimed he was off “writing something.” His staff said he was hiking the Appalachian Trail. Neither was true.

Sanford was actually in Buenos Aires lamenting over a break-up with an Argentinean woman he’d been having a yearlong affair with. When his indiscretions became public, Sanford was censured by the South Carolina House of Representatives — a slap on the wrist — and his wife packed up and left. Both were embarrassing, but things got really weird when love letters he wrote to his mistress surfaced. A sample line: “To me, and I suspect no one else on earth, there is something wonderful about listening to country music playing in the cab, air conditioner running, the hum of a huge diesel engine in the background.” What a romantic!