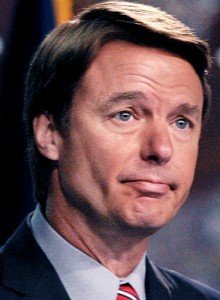 John Edwards
John Edwards was one of the frontrunners in the race to win the Democratic presidential nomination in 2008. But in October 2007, the National Enquirer broke a story about Edwards’ out-of-wedlock child with a woman named Rielle Hunter. In August ’08, Edwards admitted to ABC News that he had made “a very serious mistake” with Hunter, but denied that the kid was his. It wasn’t until January 2010 that the senator finally came clean and admitted that he was the father. Oh, and Edwards was having the affair while his wife of 30 years, Elizabeth, was battling cancer.