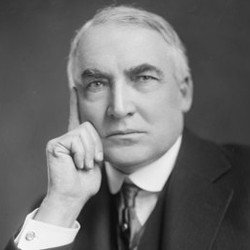 Warren G. Harding
Our 29th president had two long-term affairs. Carrie Phillips was a family friend who began hooking up with Harding in the spring of 1905. Both spouses became aware of the romps and tried to stop it, but to no avail. It was only when Harding became the Republican nominee for president in 1920 that GOP officials stepped in and agreed to pay Phillips a yearly stipend and offered her and her husband an extended vacation out of the country to keep news of their affair away from the public.

Harding’s second “other woman” was 22-year-old Nan Britton, another family friend. She became infatuated with him, and eventually — according to her — the two began a sexual relationship during which the 51-year-old Harding would sweep Britton off her feet with regular trysts in … a broom closet at the White House.

In her 1927 autobiography, The President’s Daughter, Britton outlines their relationship and claims Harding fathered her child, Elizabeth Ann, in 1919. Her book is considered the first best-selling political kiss-and-tell, but some historians say it’s full of lies because Harding may very well have been sterile.