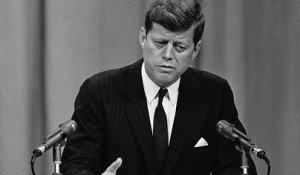 John F. Kennedy
This guy is the king of political infidelity. So much so that 40 years after his death, mistresses were still coming forward. While you’ve no doubt heard of his alleged affair with Marilyn Monroe, she was just one in a long line that included artist and D.C. socialite Mary Pinchot Meyer, Pamela Turnure (his wife’s press secretary), and former White House intern Mimi Fahnestock, who came forward in 2003.

While Monroe was the most famous mistress, Judith Exner may have been the most important. She was introduced to JFK by Frank Sinatra — JFK’s pal and her former lover — while Kennedy was still a senator and presidential candidate. But she too had a few boyfriends on the side. For instance, gangsters Sam Giancana and John Roselli. Some people still argue that it had something to do with his 1963 assassination.