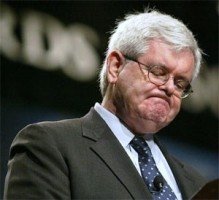 Newt Gingrich
In the late 1990s, current Republican presidential candidate Newt Gingrich was Speaker of the House and leading the charge to impeach President Bill Clinton for lying under oath about his affair with Monica Lewinsky. In fact, Gingrich used the opportunity to label not only Clinton but Democrats in general as people with no concept of “family values.”

Which in retrospect is hilarious because Gingrich was secretly cheating on his wife at the time.

Well, second wife. Gingrich allegedly told his first wife, who he met when she was his high school geometry teacher (seriously), that he wanted a divorce while she was in the hospital recovering from cancer surgery (seriously). Six months after the divorce became final, his mistress became Wife #2. In 1999, as Gingrich was trying to nail Clinton to the wall for perjury and obstruction of justice, Wife #2 was diagnosed with multiple sclerosis. Bad move, Wife #2. Turns out Newt had a side piece — a perfectly healthy Congressional staffer who was 23 years his junior. Soon after the diagnosis, Gingrich bailed and married her.

Not a great track record for a conservative candidate for president, eh? It’s cool though; as he recently told the Christian Broadcasting Network, his infidelity was merely the result of “how passionately [he] felt about his country.” Seriously.