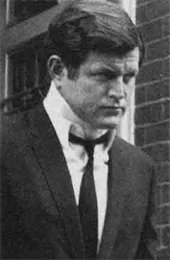 Ted Kennedy
On July 18, 1969, Ted Kennedy was a second-term senator who’d been married for 11 years. That night he left a party on Chappaquiddick Island near Martha’s Vineyard with 28-year-old Mary Jo Kopechne. What happened — or was going to happen — between the two is speculation; shortly after leaving, Kennedy’s car rolled off a wooden bridge and fell into seven feet of water. Kennedy made it out alive. Kopechne drowned.

He called both his lawyer and Kopechne’s parents that night, but he didn’t call the police. This led many to believe he was drunk at the time of the crash. It didn’t prevent an abortive run for president in 1980, but it did haunt him for the rest of his political career.