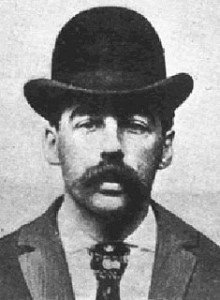 H.H. “The Beast of Chicago” Holmes (1888-1894)
Number of victims: 27 to 200
In 1886 Holmes began working at a drugstore at the corner of South Wallace and West 63rd Street in Chicago. He eventually became the proprietor after the former owner mysteriously disappeared. (Red flag?) The drugstore did quite well, and Holmes — who became known as Dr. Holmes — used the profits to build himself a three-story tall, city-block long, “Murder Castle” across the street. Of course, he didn’t call it a murder castle, but it did come complete with acid vats, trap doors, secret entrances, and gas chambers. Holmes lured people to the castle, killed them, and sold their skeletons to medical professionals. He was eventually hanged, but not before being convicted of 27 murders, and suspected of at least 173 more.

Erik Larson’s award-winning 2003 book, The Devil in the White City, told Holmes’ twisted tale so well that Leonardo DiCaprio purchased the rights to the film; he’s expected to play Holmes.