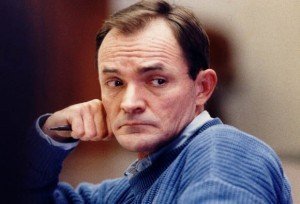 On May 14, 1983 two California policemen pulled over an apparent drunk driver on the San Diego Freeway. As the suspect stepped out of his car, he poured a beer onto the street. Officers also noted that his pants were undone. After Kraft failed a field sobriety test, cops searched the car. They found a knife, tranquilizers, an envelope containing 47 pictures of men in lurid poses, and a coded notebook (his “scorecard”) that contained 61 odd nicknames. Oh yeah — there was also a dead guy in the passenger seat.

Kraft boldly pleaded innocent at his 1988 trial, but shockingly he was subsequently sentenced to death. He continues to sit on death row.