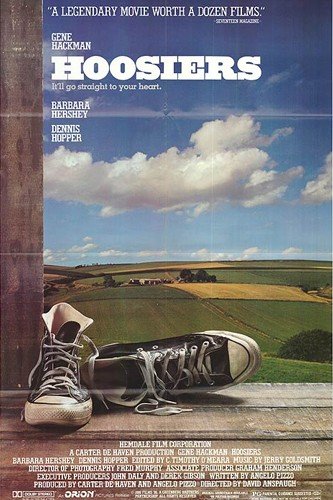 The movie is inspired by the Milan High School team that won the Indiana state basketball title in 1954. Sounds boring as hell, right? Except it’s pretty much impossible not to love Hoosiers.

Gene Hackman plays coach Norman Dale, an outsider who’s mistrusted by the creepily attired parents, and who’s saddled with a mostly unathletic group of farm boys. Oh, and his assistant coach is an alcoholic former town basketball star played by Dennis Hopper. Still, the team manages to make it to the state finals, and the film climaxes in one of the all-time great movie sports moments of all time.

Some trivia: The next movie the producer and director of Hoosiers made was Rudy. Some more trivia: Hoosiers was renamed Best Shot when it was released in Britain. The nerve of those people.