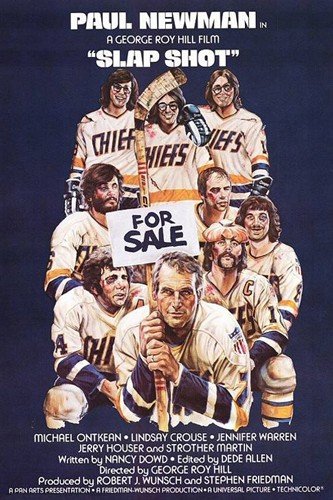 Miracle is a hockey movie about the greatest sports triumph in American history. But it’s also very PG. Slap Shot, on the other hand, is a hockey movie that has everything you could want in an underdog sports movie: A ragtag group of losers, an owner threatening their livelihood, lying, cheating, profanity, gratuitous nudity, gratuitous violence, and sociopathic brothers with Coke-bottle glasses.

The basic plot: Player-coach of the Charlestown Chiefs, Reggie Dunlop — portrayed by Hollywood royalty Paul Newman — transforms his minor league hockey squad into winners after he lets the insane Hanson Brothers intimidate the competition by beating the crap out of them. And the climax of the movie is just a giant brawl. There’s no redemption, and there’s no conventionally happy ending, so it’s not like many boilerplate inspirational sports movies or most of the top sports movies. It’s just old-time, underdog hockey!