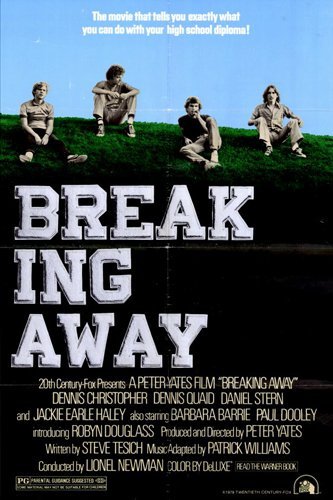 You may never have even heard of Breaking Away, but it’s a hilarious buddy comedy/social class commentary/underdog tale that was nominated for Best Picture, and it is awesome.

Dave is an aimless teenager in Indiana who’s obsessed with the sport of cycling. His Dad is a blue-collar hard-ass who isn’t exactly thrilled with his son’s “career” path — especially when he catches Dave shaving his legs for a race. But Dave keeps at it, does some badass stuff like draft off a semi on the highway, and eventually gets the chance to race against a world-class team of Italians … who proceed to shove a bike pump into Dave’s spokes at speed and cause a horrible crash.

An American cast as an underdog against Italians? Only in Hollywood! The Americans triumph in a subsequent race, however, thanks to good ol’ fashioned teamwork. Dave’s shiftless buddies — played by Dennis Quaid, Daniel Stern, and l’il Jackie Earle Haley (more on him later) — ride for a badly injured Dave until he tapes his feet to the pedals of his bike so he can sprint to victory. Take that, Italians!